Hatteras Village is the offshore fishing capital of the Outer Banks. Big-game marlin fishing began here in the 1930s. To see a blue marlin (one that's been mounted and preserved), go over to the Hatteras Village Library and Community Center. On the outside wall, encased in a glass box, is a world-record, 810-pound blue marlin that was caught on June 11, 1962, off Hatteras Island. The world record has since been broken, but this is still an impressive specimen.

Ghost Tours of the Outer Banks

Meet on the corner of Budleigh Street and Queen Elizabeth Avenue, Manteo
(252) 489-5959
Website

Experience the legends, lore and ghost stories of the Outer Banks with the original Manteo ghost tour. Explore the streets of Manteo by night as your guide shares chilling stories of the Outer Banks, including present-day paranormal activity and long ago stories of spirits. There are two ghost tours – Outer Banks Ghosts & Legends on Tuesday and Thursday and The Dead of Night: Ghosts & Graves on Wednesday and Friday. The tours start at 8 p.m. and last about 90 minutes. Prices are $18 for adults and $12 for ages 6 to 12. Children 5 and younger go for free.

Experience the legends, lore and ghost stories of the Outer Banks with the original Manteo... END_OF_DOCUMENT_TOKEN_TO_BE_REPLACED

Use this coupon any time Wednesday through Friday for $10 off any parasailing flight. 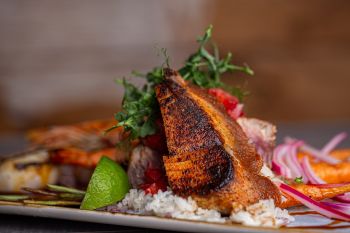