Roanoke Island is the daytrip capital of the Outer Banks (though, due to it's charm, it's quickly becoming a destination unto itself these days). That’s because the island is home to seven of the Outer Banks’ most popular attractions, and not a summer day goes by when there isn’t some kind of special event going on here.

Everybody who vacations on the Outer Banks should make it a point to come to Roanoke Island at least once during their visit. But be forewarned; one visit is not enough—you just can’t see it all it one day. The island is overflowing with things to see and do. Be sure to pick up a copy of the Eat, Shop, Play tabloid, free on newstands throughout the Outer Banks, for printed information about Roanoke Island’s shops, restaurants, accommodations, attractions and recreation.

The best way to really get to know Manteo is to stay the night. The town is perfectly quiet and even more special at night and in the early morning, and that’s a side of the town day-trippers don’t get to see. Manteo has two waterfront inns plus a couple of bed and breakfast inns and guesthouses that provide the ultimate accommodations. There are also two nice bed and breakfast inns in Wanchese. And here’s another tip: Roanoke Island has a few hotels on the main highway that offer less expensive rates than the beach hotels. And remember, this island is only about 10 minutes from the beach.

Roanoke Island floats in the sound between the Outer Banks and the mainland and is accessible by three bridges. Right across the Roanoke Sound from lower Nags Head, the island is small, only about 12 miles long and 3 miles wide. The island’s watery views and lush vegetation make it one of the most beautiful places on the Outer Banks.

The Faces of Roanoke Island

Roanoke Island has three distinct areas – lively Manteo, the Dare County seat and the only incorporated town on the island; Wanchese, a quiet fishing community; and the verdant “North End,” home to Island Farm, the Fort Raleigh National Historic Site, The Elizabethan Gardens, The Lost Colony, the North Carolina Aquarium and the Alligator River National Wildlife Refuge Center, along with the airport and residential housing. 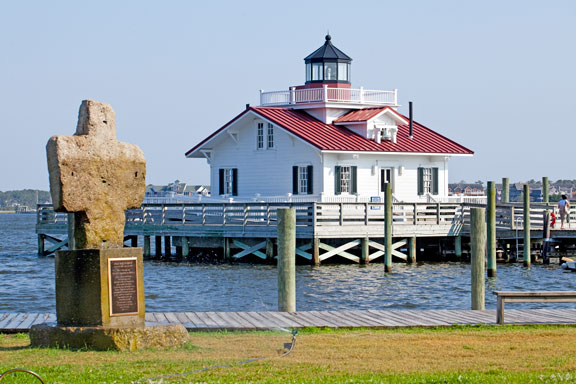 Manteo is a busy little town. Its waterfront/downtown area is an attraction in itself, with shops, art galleries, eateries, a lighthouse, a waterfront boardwalk and boats sitting in the harbor of Shallowbag Bay. The historic district of Manteo, which fans out from the waterfront, is full of restored homes and inns that make for great sightseeing or overnight stays. The historic district and waterfront area are perfect for exploring on foot or by bicycle.

The main corridor of Manteo is U.S. Highway 64. This road is lined with more shops, galleries, restaurants, service businesses and places to stay. A bicycle/multi-use path runs parallel to Highway 64 from the Nags Head Causeway to the North End. If you have a bicycle handy, we highly recommend using this path to explore Roanoke Island. Find somewhere to park the car (downtown or at Roanoke Island Festival Park are good places), then pedal away. The path leads all the way out to the attractions of Fort Raleigh and ends at a beautiful soundfront park.

The North End of Roanoke Island is incredibly scenic, with linear plantings of live oaks and crepe myrtles and a lush green setting you won’t find anywhere else on the Outer Banks. Since the Virginia Dare Bridge has diverted vacation traffic to more of the middle of Roanoke Island, you’ll find the North End to be a very peaceful place.

Wanchese does not have much for tourists except for two very popular eateries. It’s really the only area of the Outer Banks that does not revolve around tourism. This is a small village where people live and work, in the fishing and boat-building industries mainly. But it’s a nice place to take a slow drive and see what an old-fashioned island community is like. Check out the Wanchese Seafood Industrial Park to see the thriving boat-building and boat service industry operations; walk the docks at the marinas and look at the boats, many of which were locally built; buy some fresh seafood at seafood markets; then have lunch at Great Gut or dinner at Fisherman's Wharf. Charter fishing trips are available out of several marinas in Wanchese, so that might be another reason to come back.

In 1585, an English fort and settlement with more than 100 men was established on the north end of the island. That same year, two Native Americans from the island, chiefs Manteo and Wanchese, visited England with some of the Englishmen. (Now you know where the island’s communities got their unusual names.) The English hoped this would help them establish good relationships with the natives, but the relationships were later strained. This first colony was eventually abandoned due to weather, lack of supplies and poor relations with the natives.

In 1587, another party of more than a hundred English colonists, including women and children, reached Roanoke Island in July. A month later, on August 18, Virginia Dare was born to Eleanor and Ananias Dare. This is the colony that disappeared and would become known as “the lost colony.” The colony’s governor and baby Virginia’s grandfather, John White, who had been sent back to England to get supplies in August of 1587, was delayed for three years. When he came back to Roanoke Island in 1590, there was no sign of the colony he left behind, only the words CRO and CROATAN carved into a tree. No one knows what happened to these people, and this is the subject of the play The Lost Colony, which has been running on Roanoke Island for almost 80 years. You’ll notice that many of the street names and place names on the island stem from this history.

Roanoke Island also has a fascinating Civil War history. The island was the location of an early battle and was controlled by the Union Army for the duration of the war. Roanoke Island housed a Freedmen’s Colony, where escaped slaves found a safe haven for several years. 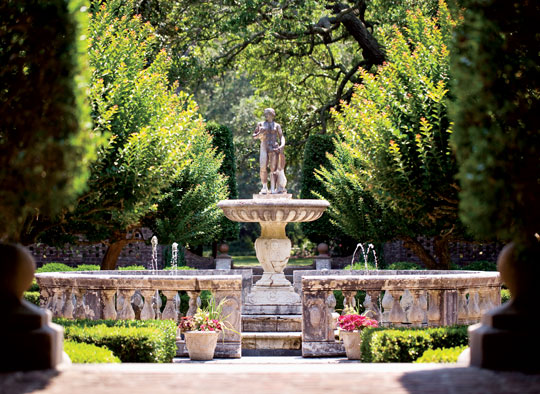 Many of Roanoke Island’s attractions center around the early colonization attempts and the Elizabethan era in which they occurred. The Fort Raleigh National Historic Site commemorates the first English settlement attempts in the New World and incorporates part of the land where the English tried to settle. The museum also tells the story of other historic events that happened on Roanoke Island – Civil War history, the Freedmen’s Colony and Reginald Fessenden’s experiments with radio. The park is also home to Waterside Theatre and the outdoor symphonic drama The Lost Colony. The drama, written by Paul Green, has been running on Roanoke Island since 1937. It depicts the story of Queen Elizabeth and Sir Walter Raleigh’s desire to establish a colony in the New World as well as the stories of the colonists who went seeking a new life and the Native Americans who were adversely affected by their arrival. The play leaves its audiences pondering the mystery of what happened. Also on the site of Fort Raleigh is The Elizabethan Gardens, an accurately reproduced and quite lovely English garden that is a living memorial to American’s first English colonists and the site for super popular events all year long.

Another site that honors the birthplace of English-speaking America is Roanoke Island Festival Park, which is located just across from the Manteo waterfront on its own small island. This park features a representative 16th-century sailing ship; a Settlement Site with re-enactors; the American Indian Town; a film told from the perspective of the natives on Roanoke Island; an Adventure Museum with interactive exhibits exploring the history of the island; plus arts exhibits and events. A waterfront boardwalk encircles part of the island and provides a shady and pretty nature walk.

Other attractions on Roanoke Island include the very popular North Carolina Aquarium on Roanoke Island, which features amazing fish tanks, animal exhibits and stand-out programs; the North Carolina Maritime Museum, which features a boat-building shop and museum along with sailing and boating-related classes; Roanoke Marshes Light, a reproduction lighthouse on the Manteo waterfront; and Island Farm, a restored mid-1850s farm that helps visitors understand what life was like on the island during that era.

Other Roanoke Island Things to Do

One of the best things to do in Manteo is to explore the waterfront and historic area. Park the car and walk around; the town is quite pedestrian friendly. You can explore the maritime museum and lighthouse, pop in and out of antiques shops, art galleries, boutiques and a legendary bookstore; have lunch or dinner; sip a latte or eat ice cream; grab a beer at the smallest brewery in North Carolina; look at boats in the harbor; walk over the bridge to Festival Park; enjoy touring through or walk around town and look at the homes.

But that’s not all there is to do on Roanoke Island. There are dolphin tours, sailing tours, sightseeing tours, kayaking tours and even fishing and shrimping tours that leave from the waterfront docks in the summer. More serious anglers may want to book an inshore or offshore charter boat from Pirate’s Cove or one of the Wanchese marinas. There’s also a fishing head boat at Pirate’s Cove. You may want to take a course at the North Carolina Maritime Museum. You can enroll the kids in a sailing camp, take a course in knot-tying or even build a boat in a day!

Here’s a little tip: In the summer months when every restaurant on the beach has a wait list each night, it’s easy to breeze right in to a Roanoke Island restaurant. For some reason, the beach visitors don’t often think to make a special trip to Roanoke Island for dinner, but they should! It’s only 5 or 10 minutes from Nags Head, and there’s not as much of a frantic dinner rush over here. For an especially quiet dinner on Roanoke Island, try to eat a little later, about 7:30 p.m. or 8 p.m. By then everyone who is trying to make it to The Lost Colony, an event at Roanoke Island Festival Park or The Pioneer Theater will have cleared out and you can have your dinner in peace.

About the Author Beth P. Storie

Beth Storie first came to the Outer Banks for the summer of 1976. She fell in love with the area and returned for good three years later. She and her husband published the national guidebook series, The Insiders' Guides, for more than 20 years and now are building OneBoat guides into another national brand. After spending time in many dozens of cities around the country, she absolutely believes that her hometown of Manteo is the best place on earth, especially when her two children, six cats and one dog are there too.

Get $1 off an Outer Banks Fishing Pier Fishing Pass!