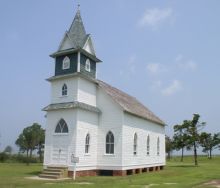 It's deserted now, except for its ghosts and the intermittent folks in Park Service uniforms. Empty. If you've never had that eerie feeling, then maybe you'll want to take the trip that most Outer Banks visitors never make, to quiet, road-less, unpopulated Portsmouth Island. Here you can literally see the Portsmouth Island history in board and batten, remnants and reminders.

It wasn't always that way. Portsmouth, which was a "planned community" authorized by the Colonial Assembly in 1753, was for many years the largest (actually, the only) town on the Banks. The slow changes of geology and economics have left it behind, however, and now it is no more. Will New York go the same way?

There is no bridge to Portsmouth from Ocracoke. There isn't even a ferry. The only way to get there, unless you brought a boat with you, is to make an arrangement with someone to take you over. Several businesses on Ocracoke will do this (see the Things to Do section of the Ocracoke site).

As you cross the inlet, if you decide to go, reflect on the fact that this was once the channel for much of the trade of Virginia and North Carolina. You see, throughout the 1700s and up to the mid­19th century, Ocracoke channel was deeper than it is now. And of course ships were of shallower draft then too. Seagoing ships could enter the inlet, moor or anchor near the southwest side and offload their cargo into smaller coasters. Then these took it up the sound to such early ports as New Bern and Bath. Portsmouth Village was established to facilitate this trade by providing piers, warehouses, other port facilities and labor.

The new town grew rapidly. The British raided Portsmouth during the Revolutionary War; a steady flow of supplies moved through it to General Washington's embattled armies. The British captured the town again during the War of 1812, but this again was only a temporary interruption and the town continued to grow. At its peak, just before the Civil War, it handled more than 1,400 ships a year and had a total population of almost 600 – no Boston but definitely the largest town on the outer islands.

Two things doomed Portsmouth: war and weather. In September of 1846, a terrific storm had opened two new inlets (named Hatteras and Oregon), and these gradually deepened as Ocracoke Inlet began to shoal. The Federals didn't help matters by sinking several ships laden with rock in Ocracoke channel, but war merely hastened Portsmouth's end. Such seagoing traffic as was left to the Banks shifted to Hatteras Inlet, and the backcountry trade was carried more and more by the new railroads. After that it was a question only of time. Few villagers returned after the war ended, even when a fish-processing plant was built, and the population steadily declined. Its last male resident, Henry Piggott, died in 1971, and with that Portsmouth's last two residents, Elma Dixon and Marian Babb, finally left.

Now only the mosquitoes inhabit it. Portsmouth Island now belongs to the Cape Lookout National Seashore. The village is now on the National Register of Historic Places.

As you debark, at a dock at Haulover Point, you'll be able to look over the harbor from whence wharves, warehouses and lighters once served the merchant ships anchored inside the inlet. For a short tour, proceed southeast down the road. The first house on the right is the Salter-Dixon House, built around 1900, and this serves as a visitor center that also provides restrooms and an exhibit on the history of Portsmouth. Many of the buildings have been restored, and visitors can enter the church, Coast Guard station, school house and post office for a peek at old island life. The interiors look as if the people have just left, and you can look into the windows of some old buildings and see the villagers’ former belongings.

The small white building south of the Salter-Dixon house is the former Post Office. This was more or less the center of the village in its day. About forty yards west of it is the community cemetery, the largest in the village, with about 40 graves.

From the crossroads, follow the footpath south across the marsh to the former schoolhouse. Miss Mary Dixon taught classes in this one­room building until 1947. Now go back to the Post Office and proceed down the main road eastward. If you stop on the first little bridge and look to the north across the creek you will see a (now) yellow-painted cottage formerly owned by Henry Piggott, mentioned above. Continue across the second little bridge. To your left you will now see the Methodist Church. You may go in. The former congregation maintains a collection plate in the church. Proceeds are used for repair of the structure, but the National Seashore has paid for most of it. Behind the church is the Babb, Dixon plot where Mr. Piggott is buried.

Continuing east from the church, beyond the last houses you'll enter a stretch of open road. Beyond this lies the landing strip, the old Coast Guard station, watch tower and outbuildings. Surf rescue boats were kept in the large building, as at Chicamacomico. The station was closed in 1937, though it was briefly reactivated for WWII.

About a hundred meters south of the station is the cistern of the oId marine hospital, which was built in 1846 to serve sick and/or quarantined seamen. The hospital proper burned down in 1894 and was not replaced.

It’s possible to walk from the village to the beach, but it’s a long one, especially in the hot summer. But the beach is worth it because it’s wide, clean and covered in shells.

A few notes of caution are in order. Prepare for mosquitoes in the fall and summer. There's no mosquito control on the island and they get fierce. (Imagine what it was like living here before window screens and insect repellant were invented.) Wear sunscreen. Bring lots of water.

Purchase any large pizza after 8:30 p.m. and get a second pizza of equal or lesser value for $7.