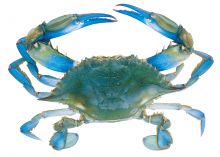 How to Clean A Blue Crab

Steamed crabs are one of the most delectable seafood treats. But there’s a definite art to cleaning a blue crab so that you get every little morsel of meat out of that tricky shell. Here’s how you do it:

1. Remove the two large pincer claws by breaking them off at the body. Set the claws aside for cracking later.

2. Hold the crab in one hand and lift up on one point to remove the top shell.

3. Cut off the "face" of the crab where it joins the lower shell and remove the internal organs by scraping them out with a knife.

4. Make a straight cut from the back of the crab, just above the leg joints. This cut is important; be sure to make it deep enough. Repeat the process for the other side of the crab. Set the two pieces removed aside.

5. Cut off (do not pull off) the remaining legs where they join the body. It is advisable to keep the thumb pressed securely over the backfin meat when making these cuts. Note where the flat, paddle-shaped swim fin or backfin is attached to the body

6. Locate the large chunk of white muscle on either side of the body of the crab (the "backfin" or "lump" meat) and remove it with the knife. (This muscle is located where the backfin was attached.)

7. The rest of the white meat in the body of the crab is located in the chambers separated by thin walls of cartilage. Remove the meat from the chambers by sliding the knife under and lifting it out. This meat is called the "flake" or regular meat.

9. Tap the claw just below the pincer to make a straight, clean cut in the shell. Gently break the claw open and remove the meat with your knife. Repeat the procedure for the other claw.

How to Clean a Steamed Shrimp

Steamed shrimp spiced with Old Bay seasoning and dipped in drawn butter or a kicky cocktail sauce is a favorite local delicacy. Here’s how to clean a steamed shrimp quickly, so you can get your share before everybody else snatches them up.

1. Hold the shrimp in one hand. Place your other thumb and index finger just above the tail fin and squeeze as if you were smashing a bug, while pulling downward. The tail should slip right off.

2. Hold the shrimp with the tail end pointing toward you and the legs up.

3. Starting at the “shoulder” (where the head was) on the underside (where the legs are) run your finger along the split of shell where the legs are and peel the shell away. If it’s a big shrimp, you may have to repeat this step for the next section or two of shell.

4. Dip in cocktail sauce or butter and eat!

Rental Prebook Special Prebook between January 1st and May 15th and save 10% on your rental...