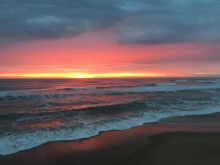 The name Kitty Hawk is probably a corruption of the Poteskeet Indian word Chickahauk. It's a town typical of the northern Banks – that is, a study in contrasts. There's a quaint old Kitty Hawk nestled far back alongside the sound. There's a more recent, but visibly aging, Kitty Hawk beach, along the sea on the Beach Road. There are established housing areas between the highways and along Sea Scape golf course as well as near-impenetrable soundside woods. Then, of course, in keeping with being a summer destination, there are miles of summer cottages and a good representation of shopping centers.

The Poteskeets moved out of the northern Banks about the time the Eltheridges, Perrys, Baums, Gallops, Hills and Twifords moved in from Virginia. There were not many of them. Living in mean dwellings on the sound side, amid forests and mosquitoes, they fished, raised a few scrawny cattle and scratched in the sand to grow a few beans. It was a hard and squalid way to live, and when, as sometimes happened, a shipful of rich merchandise like cloth, flour, rum or logs blew ashore in a storm, there was a general stampede to the scene. When the government-appointed Wreck Commissioner arrived, if there was anything left, a vendue was held, auctioning off the remains for partial compensation of the vessel's owner. The tales that the Kitty Hawkers used to tempt vessels ashore with lights are probably exaggerated. In 1700, however, it was reported that when "his Majesty's ship the Hady was drove ashore upon the sands between the Inlets of Roanoke and Currituck, the Inhabitants robbed her and got some of her guns ashore and shot into her sides and disabled her from getting off.'' From time to time dead whales, too, were washed up, and trying (cooking) out their oil was another source of income.

Since the northern inlets (Currituck, Caffeys Inlet and Roanoke, all now closed up) were shallow and treacherous, the northern Banks never developed the trade that Ocracoke and Portsmouth did and remained sparsely populated well into the 20th century. Commercial duck hunting, shrimping, crabbing, eeling and turtling supplemented the continued income from fishing, and some Kitty Hawkers went to work for the government after 1870, when the Life-Saving stations and lighthouses were built.

Kitty Hawk's remoteness and isolation were probably among the reasons the Wrights decided to try out their new flying machine designs there in 1900. Its steady, strong winds and soft sand were additional advantages.

With the easy access that the new bridges of 1930 and '31 provided, the useless sandy stretches of Kitty Hawk suddenly became desirable real estate. By the early 1980s the old beach road, now officially Virginia DareTrail – but locals just call it The Beach Road, had become effectively choked, and a new bypass was built. Development centers around this road that locals, again, just call The Bypass. Kitty Hawk has a large permanent year round population, but the town plays host to weekly and seasonal visitors also. It has the sun, sand, wind and ocean of the Outer Banks, but it feels a bit more old-fashioned than its neighbors of Duck or Kill Devil Hills.