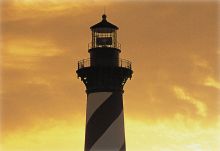 Hatteras Island, in many ways, is the Outer Banks. In its over 50-­mile length is wrapped up everything for which the Outer Banks are famous: solitude, unspoiled nature, fishing in all versions, unparalled birding and still-quaint villages. In the Pea Island National Wildlife Refuge, comprising the northern end of the island, you can drive for miles, hearing only the sea and the call of the wild geese and seeing only the dunes.

Farther south, you roll through the very stuff of Banks legend: tiny communities whose whole livelihood came from the sea. From Rodanthe, Waves and Salvo the Bankers of the Life-Saving Service battled storm and surf to save strangers' lives. Today's visitor finds the remains of wrecks still on the beaches, wooden hulls – or pieces of them – that speak to the area’s moniker of the Graveyard of the Outer Banks.

Some 40 miles south of Oregon Inlet, the island takes a sharp westward turn, leaving Cape Point jutting out into the Atlantic. Here, at its “elbow,” is Cape Hatteras, feared for centuries by mariners for its treacherous shoals. Here the nearly 150-year-old lighthouse (this one was constructed in 1870) still sends its warning beam seaward and here surfers and surf anglers find the acme of their sports.

Inland of the Cape, at the widest part of the Banks, small communities have established themselves, nestled in the depths of a unique maritime forest. The Tri-Villages of Rodanthe/Waves/Salvo greet you first, and these days you’ll see businesses that point to the international attraction of this area as a kite surfing kingdom. A bit farther down Highway 12, you come to Avon, which is now the shopping epicenter of Hatteras Island, sporting more shops than any other Hatteras Island town – even a major chain grocery store and hardware outlet. Buxton and Frisco offer camping, shopping, convenience grocers, an upscale inn and restaurant, Mom and Pop eateries and shops and more. Last, you enter Hatteras Village, close to the western end of the island at the ferry terminus for Ocracoke. It’s a mecca for sport fishermen and watersports enthusiasts.

Most of Hatteras Island is part of the Cape Hatteras National Seashore and is administered by the National Park Service. In the midst on the northern end, just past the bridge, is Pea Island, which is administered by the U.S. Fish and Wildlife Service. Ownership by these two entities provides for the preservation of most of the island. A well-kept series of campgrounds, designated sound accesses for watersports and lots of marinas and tackle shops keep outdoors types happy, and historic sites such as the Visitors’ Center at the Cape Hatteras Lighthouse, the restored Chicamacomico Life-Saving Station, the Graveyard of the Atlantic Museum, the Frisco Native American Museum, the restored U.S Weather Bureau and Hatteras Island Ocean Center provide education and entertainment for visitors.

In the early year, the Islanders lived cut off from others, evolving their own microculture, preserving old ways of speech and suspicion of authority. Since 1964, the Oregon Inlet Bridge has largely ended that isolation. Yet traces of it linger, and you will find Hatteras different from the northern Outer Banks areas. There are no fast food outlets, only three national chains (the two aforementioned one plus a Dollar place), no discos, no movie theater. The Hatteras people are friendly, but they don't accept outsiders immediately. Their villages, their economy, is geared to the summer visitor trade, but still with reservations, as if this, too, may be a passing thing. Living on shifting sand, fairly isolated all winter and knowing that any summer/fall the hurricanes can change everything, even the shape of the land, the Hatteras people learn to trust mostly themselves and the eternal sea.

No visitor to the Outer Banks should miss the southern islands, Hatteras and Ocracoke. There you will find, still strong, something increasingly rare in the modern world: Independence.