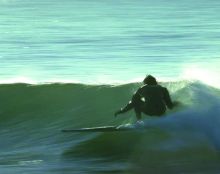 The Outer Banks is no stranger to the thrill-seeking extremist. In the 1700s, Edward "Blackbeard" Teach and his notorious gang of pirates alleviated the monotony of their days through looting, pillaging and setting fire to their own beards. In 1903, against the prudent advice of grounded conservatives, two shredders launched themselves off a hill in Kitty Hawk in a homemade flying machine. These days, thrill seeking on the Outer Banks takes new forms: skateboarding, surfing, standup paddleboarding, kayaking, kite boarding and skim boarding. To the outsider, the board sport enthusiasts crowding the Outer Banks may seem shaped from the same foam. However, the truth is that each of these sports has its own culture, and those cultures are as different from one another as they are from the mainstream.

Of all the alternative sports, surfing is well established and the highly covered by the media. There are several regional, national and international surfing competitions that are held at the Outer Banks each year. It's also the most popular. On a good swell the parking lot at Cape Hatteras Lighthouse’s old location (just north of Cape Point) fills before the first sign of daylight. Idling surfers wait patiently in the dark, watching through coffee-fogged windows and a thick layer of anticipation as the sun cracks the horizon. Thirty minutes later the cars are empty, but the famous dark brown beach break barrels are full. Watching a perfect northeast swell kissed by the southwest breeze might lead to the assumption that there are always world-class waves at these high profile breaks. 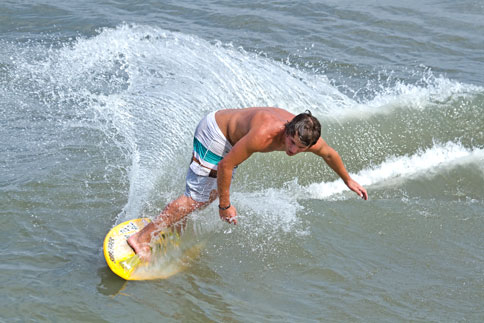 The cruel truth, unfortunately, is that sandbars make for fickle conditions, and the most dedicated of surfers spends more time looking for waves and complaining about their absence than actually riding them. Local pro Christian Kane doesn't mince words. "Yeah, it's good sometimes, like two months ago we had a good day." He stares bleakly at small choppy waves at Avalon Pier where the only people enjoying themselves are the fishermen over the water. "It is what it is on the daily, but when it's firing, it’s world class." Clearly, Outer Banks surfing does not fit the Californian standard of consistent, one hundred yard long point breaks. The good news for the surf traveler is that the Outer Banks is riddled with secret spots and shifting sandbars. Well-known breaks like Laundromat, S Turns and Pea Island can be packed on a good hurricane swell. Visitors can also get excellent surf at less frequented spots such as Corolla, Oregon Inlet or the famed once in a decade break of Shingler's Reef.

Not far from the natural scenery and the positive vibrations of the Outer Banks surf scene, Kendrick Lamar lyrics blast from the open doors of a black Mercedes on the edge of a graffitied assortment of banked concrete and metal rails. This is the Town of Manteo's skate park, and it's the most urban block on the Outer Banks. Today the park is crowded, mostly with high school kids hanging out, trading stories and constantly landing tricks. Decked out in skater-brand tshirts, with an affinity for tobacco, locals cover numerous conversational areas. It's a constant banter consisting of fight stories, significant other affiliations, parental animosity, school sports, homework, school lunch and dreams of European travel and pro sports.

Still, the atmosphere is surprisingly congenial. The vibe at the park stays constantly mellow and is kept in check by the older and more seasoned skaters. Beach Gray is a skate guru whose unlimited tricks and knowledge keep him quietly in contemplation. Beach has witnessed firsthand the local street skateboarding scene grow from a dedicated few to legions of fanatical youngsters with DC gear and little regard for the "old school" of skating. "The park getting built was amazing. I remember trying to progress at street spots and just getting kicked out of bad spots. Now everything has changed and there's never a problem finding a place to ride."

Giving directions to street spots on the OBX is unnecessary because you can skate anything you see. For old school dudes with an affinity for ripping vert, there are plenty of classic bowl riding spots, like the Wanchese skate bowl, here. 158 Skate, Currituck and Corolla parks and the YMCA also provide various setups that cater to the high-speed style of skate ripping. The Outer Banks has something to offer regardless of whether you dress like Muska and make your own beats or listen to Pearl Jam and do construction.

And Then There's Outer Banks Skim

Something of a little brother between the rugged surfing scene and the youthful skate scene is the skim boarding scene. Like most young siblings, skimming is tolerated but not taken very seriously by local adrenaline junkies. Yet even on a flat day at Windjammer bathhouse in Nags Head, the skim boarders have tracked down some action. It's common to see the ranks of skim veterans waiting for a wave, its energy zapped by the high tide to reform and pitch. They sprint, pitch their boards and charge the shallows of incoming waves. Cheers and jeers sound out from the watching gallery of fisherman and sunbathing beach bunnies. Local skim boarders are undaunted by their inferior status. Die hard surfers will tell you that skimming possesses no soul, but local skimmers are undaunted. The constantly shifting sandy bottom of the beaches here make for interesting wave variations many skimmers find to their liking. Although it might not compare to California's Wedge or Guatemala's Ola Loca,Hammond Street is the most high profile starting point for travelers looking for a session.

Riley Shelton receives respect for deep barrel timing as well as for skateboarding prowess. His search for Zen is defined by his mastery of various forms of wave riding. "Skim boarding is the s*** because you can do it on any given day regardless of conditions. It's not typical California style because most affluent riders reflect the dirty OBX skateboarding attack. High performance skim boarding illustrates individual style and allows riders to express personality. Some guys come in briefcase, others monkey drop, but it comes down to personal expression and most importantly progression."

Skim boarding may have the youngest followers, but it’s not the youngest sport on the Outer Banks. That honor goes to kite boarding, a Category 5 storm that slammed into eastern North Carolina in the '90s. On a blustery day in Salvo, the after-effects of that storm are racing up and down the sound combining sailing and flying. The latest and most physically demanding of the action sports, kiteboarding defines the secret correspondence between Blackbeard and Orville Wright. The colored kites and the tranquility of the marsh make for a pretty scene, but kiteboarding is nothing if not intense.

Professionals at the REAL Watersports kite boarding course in Salvo make technical rail variations and rotational air maneuvers seem second nature to onlookers. However, high profile kiteboarding requires not only unlimited knowledge of weather conditions but also top-notch physique. Control and precision rely on the ability to redirect natural conditions at will. 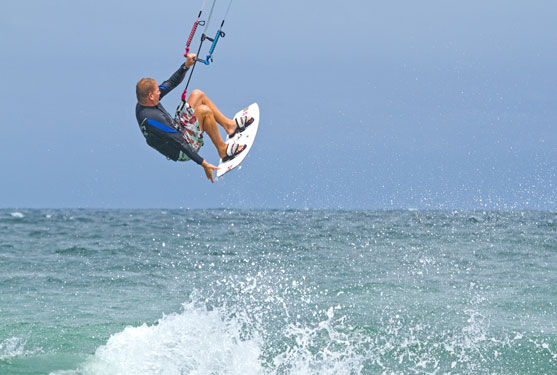 Longtime kite boarder Ralph Cleaver has developed the skills to navigate the elements. "It's one of the purest feelings because it's totally natural. You feel the power of the wind and realize that there are endless possibilities. You progress into ocean riding using wave power to experience new situations. There are endless possibilities. You can cruise or try to get major air. Choppy messy surf, which you wouldn't normally surf, can be maneuvered through with a kite. The guys pushing it do wake board, tricks but it's more natural because there's no boat motor involved. Riding is based on the wind. It's something you can do year round here."

The Outer Banks is famous for the diversity of entertainment packed into a tiny strip of sand unique for different types of board riding. Whether it's surfing, urban skating, youthful skim or the raw athleticism of kite boarding, there is soul reflected through all forms of riding. Island attitudes and the search for the perfect ride define old friendships amongst locals and open doors to meeting others who share the same passions. Kite boarders coast on the same winds that launched the Wright Brothers into history, and surfers cruise the same seas that Blackbeard pillaged, neck-deep in flames. Different places have different things to offer traveling riders, but when it comes to variety and temporary perfection, nowhere compares to the Outer Banks.

Save $5 on our 3 Little Pigs special! There is an additional charge for beef and onion rings.