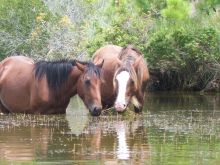 No matter how many times you’ve seen them, seeing the wild horses roaming free on the northern Outer Banks is an amazing sight. We’re so used to seeing horses contained in pens and cared for as pets that to see them wild and taking care of themselves is always surprising.

A herd of approximately 100 wild Colonial Spanish Mustangs now lives on about 7,500 acres of federal, state and private land north of Corolla, known as the four-wheel-drive area. They have access to the Currituck National Wildlife Refuge, maritime forests, marshlands and wetlands and roam through communities of beach rental homes and sometimes onto the beach.

The herd of Corolla wild horses used to be concentrated south of this location, in Corolla proper. In the late 1980s and early 1990s, as Corolla developed into a major resort area, the horses could be seen munching on fescue and Bermudagrass lawns and nosing through trash cans. 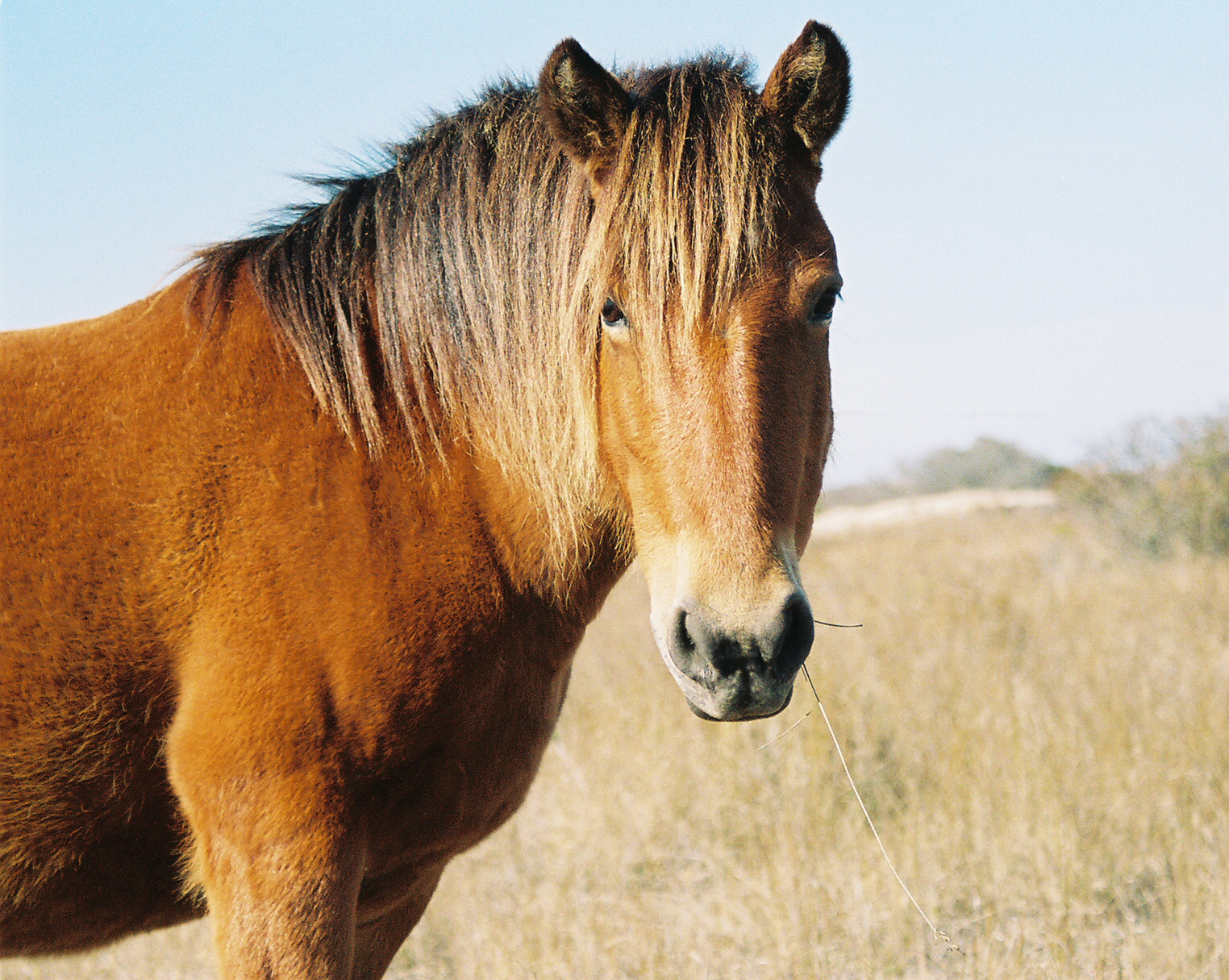 As traffic and the human population increased in Corolla, the wild horses began to experience life-threatening challenges. In 1989 local residents formed the Corolla Wild Horse Fund (CWHF) to watch over the herd. After almost 20 horses were injured or killed by cars on local roads by the early 1990s, the Corolla Wild Horse Fund knew they had to take dramatic action. It took two years to get permission, but by 1995 they were able to move the remaining horses to the four-wheel-drive area north of Corolla. A sound-to-sea fence was constructed to keep them from returning to Corolla. In 2003, a similar fence was built on the north end of the four-wheel-drive area on the Virginia line to keep the horses from straying into False Cape State Park. Although their range was reduced by 9,500 acres, they were now much safer from harm. It was a bittersweet milestone for the CWHF.

The Corolla Wild Horse Fund’s mission is to protect, preserve and responsibly manage the horses and the land that they roam. The organization has grown significantly since it incorporated as a 501 (c) 3 nonprofit and added its first fulltime staff in 2006.

One of CWHF’s most exciting developments was confirmation by the Horse of the Americas Registry that the horses are definite descendants of Spanish mustangs and eligible for registration as Colonial Spanish Mustangs. The registry was so sure of the horses’ origins that they blanket-registered the entire herd. DNA testing in 1992 and 2008 also supported their findings, finally putting any controversy regarding their ancestry to rest. The Colonial Spanish Mustang breed is on the Critical Breed list of the American Livestock Breed Conservancy as well as the Equus Survival Trust, making it even more important to preserve these historic horses.

Extensive research done by the late Dale Burrus of Hatteras and Carolyn Mason of the Foundation for Shackleford horses outlines three explanations of how the horses came to the Outer Banks, one of which is that they came with Spaniards who were exploring the New World. Some horses were able to swim ashore when Spanish ships were wrecked or ran aground, and others were simply abandoned when colonies failed. The earliest records of horses being thrown overboard when a ship ran aground off the coast of North Carolina date to 1520.

The horses’ presence was also noted in the late 1700s, when Sir Richard Grenville wrote about the animals, calling them “well-shaped and swift.” Edmund Ruffin also encountered the horses on his voyage to North Carolina’s barrier islands in the mid-1800s. He described them as "all of small size, with rough shaggy coats, and long manes; their hoofs in many cases grow to unusual lengths, they are capable of great endurance of labor and hardship, and live so roughly that any others from abroad seldom live a year on such food and other such great exposure.”

However they got here, these hardy horses have survived for centuries on their own, without being fed or touched by humans. In spring and summer they are fat with glossy coats. By winter, they have grown heavy, shaggy coats. The horses forage for grasses and plants found naturally in their habitat, and they drink fresh water from the Currituck Sound estuarine system, rain puddles, manmade canals and small lakes formed by storm water. No supplemental feeding is necessary and can actually harm the wild horses. Older and younger horses may colic if they eat anything that is not native to their specialized diet.

The Corolla Wild Horse Fund is responsible for the overall management of the herd. Herd manager Meg Puckett checks on the entire herd and monitors its health and behavior. Horses with injuries or illnesses that affect their quality of life are captured, restored to health and adopted into loving homes. She also onducts four herd counts per year via helicopter. The counts give the CWHF a better idea of how the horses use their habitat and get a better idea of how many horses the land can support in the face of human development.

CWHF relies on its many dedicated local and visiting volunteers to help with captures and other horse-related emergencies. CWHF also works with local, state and federal officials on policies and management practices that will benefit the long-term survival of the herd. A minimum herd size of 120 to 130 is needed to maintain genetic and physical health.

The Corolla wild horses are one of the most popular tourist attractions on the Outer Banks. People love to see the rugged horses in the wild reaches north of Corolla, where there are no paved streets and four-wheel-drive vehicles use the beach as if it were a road.

Several outfitters offer guided tours or four-wheel-drive rentals to allow people to see the horses, each company competing to offer the most unique mode of transportation into the horses’ habitat. The CWHF offers a membership opportunity that includes an educational trip with the herd manager. Taking a tour is the most reliable way to see the horses, as the guides know the horses’ daily habits, but it is also likely that you’ll find them if you drive your own vehicle up north of Corolla. You may not catch them splashing in the surf, as that sight is not an everyday occurrence, but you may see them in the dunes or maritime forest. 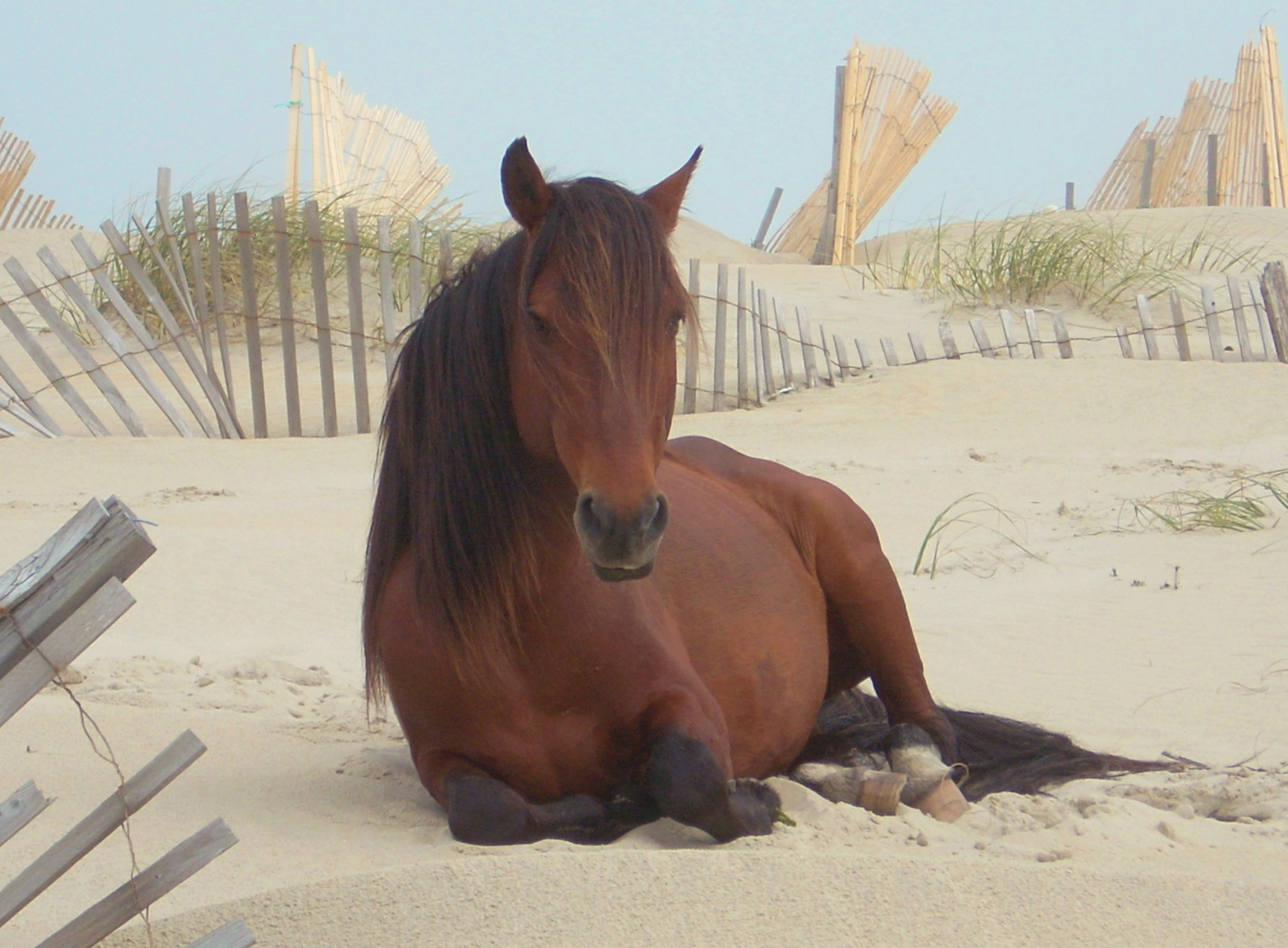 When looking for wild horses it is important to remember that you must stay a minimum of 50 feet away, and do not feed them. Unfortunately, some people want touch them and feed them or, worse, harass them. People have been seen trying to put their children on the backs of wild horses for photographs, walking up behind the horses to pat them on the hindquarters, feeding them pizza and junk food, and chasing them with their trucks. Sadly, seven horses have been shot since 2001 with no arrests. For these reasons, Currituck County recently updated its Wild Horse Ordinance, making it illegal to intentionally come within 50 feet of a wild horse. Fines for violations of the Wild Horse Ordinance can be as much as $500. Remember, these horses are wild animals and they bite and kick. The law is there to protect the horses – and the humans.

Whether or not you can make it to the four-wheel-drive area to see the wild horses, it’s worth a visit to the free Corolla Wild Horse Museum in Corolla village to learn about them. The museum is in the quaint Corolla schoolhouse (circa 1900) on the corner of Corolla Village Road and Schoolhouse Road.

A video about the Corolla wild horses, featuring the familiar narration of Charles Kuralt, runs continuously. One exhibit has a button to push to hear the horses whinny, nicker, neigh, snort and squeal. Another exhibit teaches about the colors of the wild horses — bay, chestnut, paint, black, and flaxen mane and tail. There’s a horse’s leg bone to study, text to read, pictures to ponder. The back wall features an enlarged aerial photo that shows the horses’ current habitat. A volunteer is always on hand to answer questions.

The gift shop has some great horse-related gifts, and from Memorial Day through Thanksgiving there is a rescued and tamed wild horse to pet and children’s painting activities once a week. Proceeds from all activities, gift shop purchases, donations and memberships go toward the Corolla Wild Horse Fund’s efforts to care for the wild horses.